Great Teachers Have Known All Along

“We’re all in this together” is a phrase that keeps repeating itself to me in recent weeks.  I’ve always been a believer in community, but the world seems so strikingly different today, than it did even just three or four weeks ago.  “Community” suddenly feels a bit Woodstock-ish, in its rapid, and sudden, evolution to “we’re all in this together”.

The tremendous number of good people in the world can grasp this notion, but it seemingly remains an intellectual concept.  Do we really understand in our living experience, what it means?  My social media is a “community” and my website was built for the purpose of supporting teachers and students as a community, yet both have been the most isolating experience I’ve ever had.  The sad reality is, that each of us is caught up in our own life and the challenges it brings.

In my own conundrum around this, my jaw often drops in confusion around how it is, that we’re not coming together as a collective, in a time that is commanding it from us. If we’re not going to practice empowerment now, then when will we?  We’re living through a culmination of diseased behaviour that has been permeating our planet for centuries, and none of us seem to know what to do about it.  Good honest educated people, well intentioned people, those who live well and with respect, who agree we need to come together, are challenged to do just that, in the way that is necessary for a better world.  It makes me wonder, is it not happening because we don’t fully understand the concept?  Our intelligence declares “of course I know what it means” but I question whether we’ve had the living experience of it in a way that we grasp it into our systems.  It seems like we’re trying to apply an archaic system (the cause of the destruction), to a concept which is turning out to be, revolutionary…”we’re all in this together”.  This phrase is its own entity separate from our old school system, so it can’t be understood or expressed from that framework.  The old system is built on a framework of: “it’s all about me”, “I”ve got to get what I can”.  This is a corporate mentality and experience of existence.  Yet the corporate structure is so strong and prevails everything, that we don’t know that we’re not seeing. 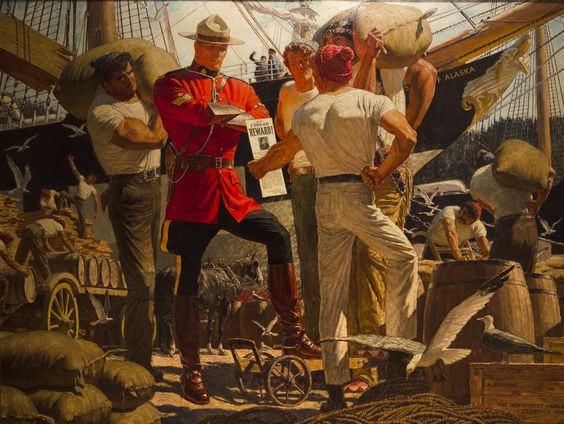 image credit: the trail ends at the sea by arnold friberg

To really consider its meaning, we need to feel into this statement on another level, an engaged and interactive level. “We’re all in this together” means we need to resolve this together, we need to come together in a form of humbleness, openness to new understanding and to each other, and support of one another in a way we’ve not seen collectively in a very long time, if ever. It means that we actually need to engage with each other.  It’s an entirely different way of framing our perception from what we’re used to….and that’s the block.  We come up against that feeling of knowing something needs to be different and then we’re stumped.

So, what is community?  Well I’m still learning, but this is what I do know (and I’m sure the list is much longer with a great ability to evolve):  understanding of one’s own self helps greatly in our willingness to being open to the perspectives of others.  Through brainstorming and valuing different perspectives we can bring a meeting of concepts and ideas in a way that can work together; humility stems from understanding.  We need to be humble enough to admit that we don’t know everything, and everyone has something of value to contribute.  This is a letting go of control, and gearing toward education and growth; and, through it all, this is where we dig in, we lean into the traditional teachings and wisdoms of those who knew better.  In comparison to all of humanity, there have only been a handful of such people, considering we’re able fit them on a list.  It’s not the norm to live by such teachings, and yet they are the very essence of what we need to embrace in today’s collective.  These teachings are really the only way through what we’re currently living in.  The old system mindset (which is corporate based) is seeing current circumstance as the end of the world, a higher mindset (spiritually based) is seeing it as transition that we can get through….but it is through (spiritually based), not over, or avoiding (corporate based).  And ‘through” means we need to rely on one another….on one another’s intelligence, one another’s support, inspiration and vitality we bring, to really gain the concept of community and lean in to it as far as we have to.

We can’t approach “community” from an “I” standpoint, and, without realizing it, that’s what we’re trying to do.  We’re baffled by what’s happening without knowing how to change it, simply because we haven’t ever learned what “community” is, it hasn’t been taught to us because it hasn’t been mainstream.   It’s time now to want to learn.