Hope and the Hummingbird

But the next few days kept bringing it to mind and it led me to question whether “trust” or "faith" is a higher form of “hope”?

Jumping tracks before coming full circle, let's consider the hummingbird.  They can migrate distances of up to 2000 miles, and I'm sure the weather isn't all clear through every mile.  But they know, they know where they need to be and they know they'll get there.  A hummingbird doesn't consider that it will need "trust" for its journey because it already IS trusting, it's already at one with trust, and it moves forward from there.  A hummingbird is so united with trust that his skills of discernment are developed in the way that takes him there.  Trust for the hummingbird isn't something to gain or acquire or learn, it just is.  It's simple, like everything else that is Truth. 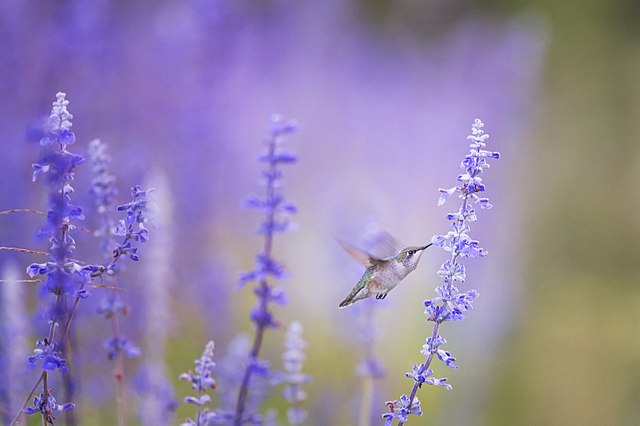 Hummingbirds don't complicate decisions with fears of whether making a slightly eastward or westward curve on its way south will be right or wrong.  He doesn't pack it in then, becoming overwhelmed with indecision.  He doesn't complicate fears and doubts and their resulting multi-layered decisions, on top of his trust so as to confuse himself.  He just trusts, leaving it for what it is, accepting it as it is in its simplicity, instead of making a convoluted mess of decisions.

So it's not trust that's the issue, it's the garbage heap of indecision we pile on top of it that's the issue...that's what separates us from trust...and that's what leaves us clinging to "hope".  So things are more a matter of, how willing we are to release what separates us from trust, let go of grasping that wall, and question whether we're actually feeling entitled to keep holding that wall as a justification not to trust.  It's not easy, so this is not flippant, but the choice is really ours.  Are we able to quiet that questioning and uncertainty of the mind enough, to connect with trust...to choose trust more frequently over the indecision, as our way to connect with the trust that is already inside of us?

I drew a similarity from Santosha (which is Yoga's second Niyama of Contentment).  When we come to experience Santosha, we understand and accept the difference between “happiness” and “contentment”.  Happiness being a somewhat fleeting feeling because of its dependence on an outer experience; whereas contentment is an inner state of being that isn’t reliant on what is happening outside of us.  Contentment is stable, it’s balanced, and it’s ours…whereas the highs and lows of happiness means it’s never really ours, we’re dependent on an outer source to fulfill it.  Likewise with "hope", it can string us along a bit.

But do we prefer to hope?  It's a little bit easier than trust, isn't it?  We can shine it up and think that we're happy there.  But when we hope, we’re not really trusting.  The safety-net of hope is that it will still accommodate our personal sense of control (that "wall" I mentioned previously).  And this really only puts us half-way there.  Trust on the other hand, means we’re all-in: “I’m here and I’m ready” (harking back to that same active waiting I referred to in October’s newsletter).  So if we don't rely quite so heavily on hope, and aim instead for trust, we naturally arrive at contentment.  A big deal, right?  We’re squeamish around trust simply because of that surrender of control it requires.  But let's be like the hummingbirds; I'll meet you out on the brilliantly flowered field of  Trust.